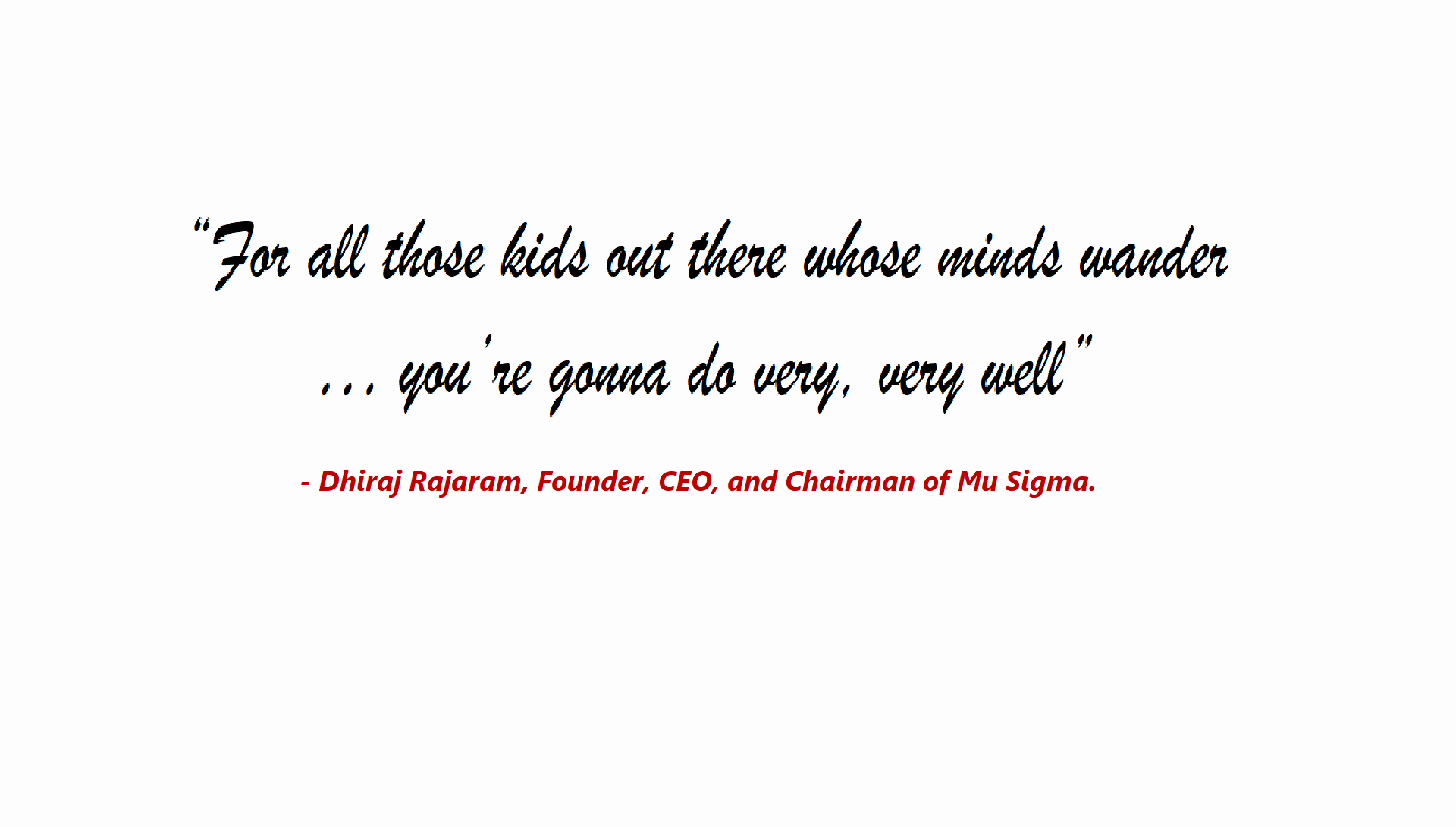 Most of us grow up believing that a wandering mind is not good. But what if a wandering mind could create something beautiful and lasting? What if it could not only prepare you to deal with the striking complexities that life is sure to throw your way, but help you thrive in their midst? Dhiraj Rajaram, Founder and CEO of Mu Sigma takes a trip down memory lane, reminiscing how the idea of Mu Sigma arose from a wandering mind.

“I always struggled at school. I was not one of those kids, who could do very well in a given system. My mind would wander. It would go from one thought to another thought. It would want to connect various things. It would be constantly distracted. And as a distracted kid that was tested again and again by the system, I lost a lot of my confidence when I was at school. Then came the board exams, which tested me on a certain syllabus and I was fortunate enough to do okay in that, and eventually went on to go through an Engineering program which again tested me on a certain syllabus. It didn’t allow me to get distracted, it didn’t allow my mind to wander, it did not allow me to experiment as much.

And then came life, where I was free to do what I wanted to do. The beauty of life is that it does not test you the same way as the system did. And the good thing about life, is that it allows your mind to wander. If only you would be brave enough to do that. And I did! And that’s how Mu Sigma got started. “

Mu Sigma, founded more than a decade ago, is an industry leader in the decision sciences space and works with over 140 Fortune 500 clients. Despite having given structure to complex, almost unidentifiable problems faced by several of the Fortune 500, it is quite astonishing to note that the thought behind building Mu Sigma came from Dhiraj’s wandering mind. A wandering mind that allows fumbles and mistakes to happen constantly, allows oneself to learn from those mistakes, and gets amazed at the surprises nature throws at it from time to time. Having achieved an astounding level of success with Mu Sigma, Dhiraj puts it, has allowed him to propagate the thoughts and philosophies from his wandering mind at a much larger scale now. One of these he says, is that the shape of complexity, the shape of uncertainty, is the shape of a network. And how people interact across disciplines, across hardware and software, across functional silos, and across the various type of expertise they have, all within that network, becomes far more important than the people and entities themselves. Everything is connected.

We at Mu Sigma believe that there a few key ingredients critical for tomorrow’s young talent to succeed. Curiosity. The ability to connect dots and make up insights. The ability to engage with people, platforms, and processes. And last, but not the least, having the grit to not give up. These qualities become extremely important to thrive in an interconnected world that is changing faster than most people can adapt.