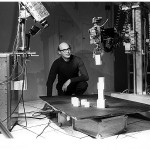 Marvin Minsky is no more.

What do we feel when a great person and a great mind is no more?

I felt sadness when Feynman died. I felt a sense of betrayal when Robin Williams died.

I also felt a sense of regret, when Marvin Minsky died, a feeling of an unexplainable loss, an invitation to reflect on how I encountered him, and to do some googling to get some more detail about his life and his work to remember why he was and continues to be important in the history of ideas.

Minsky was 88, a glorious age to go, and lived a continuously active life till the end. He gave Artificial Intelligence its name, established it as a subject of enquiry, stuck to it through a cycle of cynicism, and was one if its prime motivators throughout his life. One of the giants striding down the corridors of MIT, adding to the myth and luster of that Cambridge institution.

He attacked problems of intelligence in software and computing with the goal of beating the Turing Test, and was equally energetic in decomposing the structure of the human mind. Great and small minds encountered him and his ideas and were richer for it.
From the New York Times – “Among them were Ray Kurzweil, the inventor and futurist; Gerald Sussman, a prominent A.I. researcher and professor of electrical engineering at M.I.T.; and Patrick Winston, who went on to run the AI Lab after Professor Minsky stepped aside. Another of his students, Danny Hillis, an inventor and entrepreneur, co-founded Thinking Machines, a supercomputer maker in the early 1990s.Mr. Hillis said he had so been taken by Professor Minsky’s intellect and charisma that he found a way to insinuate himself into the AI Lab and get a job there. He ended up living in the Minsky family basement in Brookline, Mass.”
I first encountered Minsky in a bookstore in the US. Both the title and image on the cover made the book “The Society of Mind” irresistible, and I had to buy it after browsing a few pages. The image was one a simple plastic spheres consisting of six or seven parts that were fiendishly difficult to put together, a precursor of the Rubik’s Cube. In the book, he decomposes the mind and its processes as acts of simple, mindless agents.

The gentlemen endorsing the book on the back cover themselves were interesting – Martin Gardner from The Scientific American, Gene Roddenberry – creator of Star Trek, and Michael Crichton – writer of such modern science fiction like The Andromeda Strain, Congo, and Jurassic Park.

He is the kind of ideas man who inspires us at Mu Sigma – a man who brought math, computing, and science to tackle complex problems.
A polymath, a man of mythical status that awakens the geek in us to spend a few weeks learning LISP, a man with humor and wit, much like Richard Feynman.

A rare breed of gentlemen and women these. People who inspire our own curiosity and quests, and make the journey rich and rewarding.

The kind of chap that makes our own Srivatsa Kanchibotla stay inspired in the pursuit of simulating the working of the brain, and perhaps inspires Zubin Dowlaty to draw the roadmap for machine intelligence for the next couple of years.

Many of us must have already had some Minsky moments.

If you haven’t spent much time with Minsky, do so. He will make it worth your while.