Father Christmas: Just how does he deliver a present to every child in 24 hours? 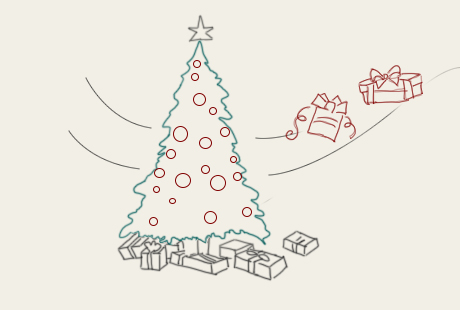 Around 2 billion people around the world celebrate Christmas each year , with increasing pressure on Santa to deliver material happiness by The morning of 25th December to a growing population. Based on global average occupancy, this means that one man, with a team of reindeer, must visit 666,666,666 homes (no, the 666 is not the number of beast, just math at 3 individuals per home) over the course of one single night. While in past years, Santa’s trusty team of reindeer and his hand-made oak sleigh were sufficient to deliver presents to the world, changing demographics and mass production of gifts mean that Santa must change his methods if he hopes to continue to bring joy to the world every 25th December.

Fuelled with cookies, a system of time zones sympathetic to his task, and the pressure of children’s hopes and dreams, Santa might typically deliver a Furby toy for a child (0.63kg), an iPad for dad (0.68kg) and a Kindle for mum (0.37kg). It means Santa must also consider the logistics of manoeuvring and delivering just over one million tons of festive gifts each year.

Over land, or by air?
In Christmases past, with a traditional format of reindeer propulsion (with a maximum land speed of 35mph) for a wooden sleigh, it would have taken Santa a month just to circumnavigate the globe once (24,901 miles) – which frankly, does not compute. It’s time Santa snapped back to reality and ditched Rudolph for a more fuel-efficient form of transport. Adult reindeer, such as the red-nosed Rudolph, must eat 9 to 18 pounds of vegetation each day, so Santa would have to pack over a ton of leafy greens just to circle the globe.

Keeping up to date with aeronautical technology, his sleigh should now be made of lightweight aluminium, and might have similar specs to the Antonov An-225, the largest plane in the world – which has a maximum take-off weight of 640,000 kg. Jet propulsion technologies could also mean that Santa can travel at speeds of up to 4,520 mph through the sky, meaning that he can get around the world in just 5 hours and 30 minutes. Taking into consideration his top of the range take-off weight, this would mean that Santa would need to complete his deliveries by popping back to his main gift hub 1,420 times in order to deliver the full volume of presents. Yet this still does not allow enough time to deliver the gifts to each household within a 24-hour time period. Not to mention runway problems.

Clearly there are some inefficiencies involved, as return trips to refill his sleigh would add significant time to his gift delivering mission – in the most extreme case adding 246 extra days – assuming, of course, that Santa has not relocated from the North Pole. If Santa is in with a chance of delivering the goods within 24 hours, he needs to make some significant logistical improvements.

Santa invests in warehouses
So far we have seen how Santa might struggle to complete his task within a 24-hour time frame, especially while considering children’s bed times, milk and cookie consumption minutes and fitting down chimney squeezing. So in his 24 hours, he has to make the most effective use of his time.

The use of a central gift hub to which Santa makes many return trips throughout the night introduces inefficiencies that a man with his responsibilities and constraints simply cannot afford. Instead, by building distribution centres across the world, Santa would cut out having to make return journeys and instead could distribute the presents ready for delivery in the months leading up to Christmas – perhaps this is what he does all year. Starting from Christmas Island, Kiribati (the first places to experience Christmas morning at +14 UTC6), a network of gift depots scattered across the globe would lead Santa in a westward race against the rising sun. With over a thousand depots to visit, organization is key.