The curious case of the headless chicken! 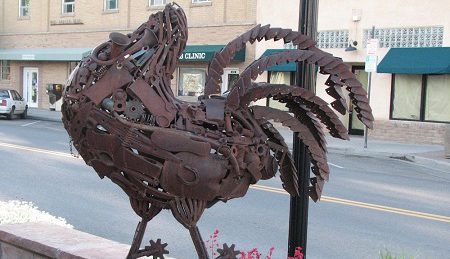 Cut off a chicken’s head and it will stagger around for some time, say a couple of hours or a day at max.

If this is what you thought, you are both right and wrong!

Under normal circumstances, you would be right. But here is an interesting story about Mike, the headless chicken.

The fateful day of September 10 1945, a farmer by name Lloyd Olsen of Fruita, Colorado, United States set out to please his mother-in-law. Instead he shocked an entire world!

His mother-in-law was fond of roasted chicken neck and Olsen wanted to take care to give her the biggest possible chicken neck. He beheaded the chicken named Mike who was a five-and-a-half-month-old cockerel.

As expected Mike staggered a few steps, but soon, started to balance on a perch and walk clumsily. What more, he also attempted to preen, peck for food, and crow. This left Olsen dumbfounded.

He left Mike alone and the next morning found him in sleeping with his wings covering the place that hitherto held Mike’s head!

Olsen decided to give the chicken all that he had and began feeding him with liquids with an eyedropper. He gave him an occasional grain, followed by water through the esophagus opening. What followed, as they say, is history.

Olsen, in an attempt at fact finding, drove 250 miles to the University of Utah in Salt Lake City.

Scientists at the university determined that it was indeed Olsen’s careful aim and a bit of luck that had created this magic. The axe blade had missed critical veins (jugular vein in particular) and a fortunate blood clot had kept Mike from bleeding to death.

In addition, the cut had spared part of Mike’s brain stem and left it intact – the section of the brain that controls breathing, heart rate, and reflex actions. Olsen’s blow had not deterred Mike from hopping around the yard or climbing to sit on his perch.

Of course, his attempts at preening his feathers and crowing, were not successful and his crow sounded like a gurgling noise!

Over the course of the 18 months that Mike lived headless, his journey brought him name and fame, that to this day remains unparalleled (imagine the number of chickens that went under the axe in an attempt to recreate the accidental magic that Olsen had performed!). Mike, along with Olsen, traveled the entire nation including New York City, Atlantic City, Los Angeles, and San Diego where eager sideshow patrols paid 25 cents to see Mike, the “Wonder Chicken”.

Meanwhile Mike had gained considerable weight. He grew from a mere 2.5 pounds to 8 pounds, while his value was plugged at a whopping $10,000. His peak performance period fetched him $4,500 per month!

The headless chicken’s saga came to an end when he was touring Phoenix. A grain that he had eaten choked him and Olsen and his wife had unfortunately left the feeding and cleaning syringes at the previous sideshow and were unable to clean out the passageway in time.

This curious case of the headless chicken – A very careful wield of an axe and the right luck in place, created magic. And then a momentary carelessness took it all away.  in just a fraction of a second!

In our day-to-day lives we live through such moments, both personally and professionally, when months, even years of hard work at creating magic is snatched away by a moment’s carelessness.

I leave my readers with one question to ponder: How can we avoid this situation?