Program for Global Associates Before and After – With Madhukar Yarra 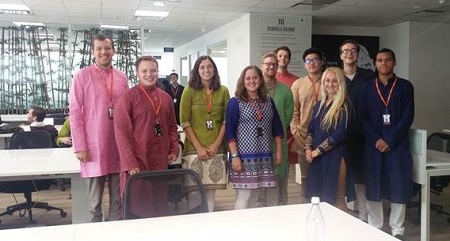 A sense of calm prevails in the muFo room as Raghu Venkataraman gets together with Madhukar Yarra to interview him on the Columbus Program he so successfully orchestrates.

MY: First of all, anything in mu sigma is constantly evolving and subject to change. The challenges we saw in the Program for Global Associates batch last year was that it was the first time we were doing the India aspect of Program for Global Associates, we largely followed what we were doing with the India batch, and that was predominantly based on the idea of self – learning where people would be given topics and learning material and would go learn by themselves, and while there were some form of assignments and tests, there was really no grading of those, and no feedback that was given. I think we were also very unsure as to what the cultural sensitivities would be. Overall what it resulted in was a very diluted experience for the Program for Global Associates grads, where some of them who were interested in the self-learning aspect would definitely learn, but in general there was no pressure or appetite for them to learn.

RV:So let me come back to one of the first things you talked about, what you called the change from self-learning to guided learning. What is that about?

MY: To that extent we continued to learn from or apply similar things to the India induction batch. So we made a huge investment and effort to revamp the process to make it more classroom driven, lecture driven, assignment driven, with graded assignments and graded tests that people would either pass or fail.

RV: A tougher bar, I understand?

MY: Yes, as you said, depending on the cutoff … a tougher bar. So that was extended to the Program for Global Associates batch as well. On top of that, we introduced good amount of role plays. Role plays of situations around customers, being on a call with the client, having to present the results of a particular analysis, trying to discover the problem with a client, having conversations that they would with a delivery team in India, simulate conversations they’d have in a monthly or quarterly review with more senior stakeholders on the client side. Role played multiple such scenarios. Would want to develop more and make it a portion of the curriculum going forward. The second thing is we took advantage of the whole six month period that they would be in Bangalore for and we broke it down to three parts, where there were only two parts last year. One is the learning phase in terms of classroom learning and the mock project, and then they would be assigned to the accounts they would go work with in the US.

“The Program for Global Associates has been such an eye opening experience for me. I’m enjoying the vibrant office in Bangalore and learning valuable skills. The best part has been getting to make friends here and experience the Indian culture first hand.” – Jacob Brown

RV: One change that I observed, when I was doing the storyboarding sessions, was that for the first time the PGA folks and the India folks came together …

MY: Right, I was coming to that. It is the other big change that we have done starting from the classroom phase through to the mock project, they are mixed up into smaller groups with the India induction batches. What we’ve done is we’ve made batches of 30 – 40 people depending on different topics and sessions and in each of those we have split up the members of the Program for Global Associates to go through the topic or project along with the India induction batch.

“There is much I find commendable about the work culture at Mu Sigma, particularly the camaraderie within teams and the veneration for intellectual pursuits; I admire my team and batch and will miss them dearly.” – Neil Patel

RV: I understand it doesn’t stop there. You’re looking to do more with the cultural aspects of getting to know how to live and work here.

MY: Right, so that is something that we’re planning for next year, that they start living with some of their Indian colleagues for the period that they’re here, opposed to just being amongst themselves. Have a deeper and richer experience and a better appreciation for the culture, the ways of life, build stronger bonds.

RV: So these are the aspects of program change in India, but I understand you also started doing some things in terms of bridging the relationship with the RHs?

MY: So we’re talking about the role plays and the time they’re spending with a different client or a project team from where they’re ultimately going to work. Those aspects and components have been designed with a high level of input and interaction with the regional heads and client service team members.

RV: So does the RH play the role of the client?

MY: I mean they’ve helped us design the role plays and yes they do participate in them playing different roles, sometimes as clients. Those things vary. But in the account learning phase they have specific reviews where they need to talk about the org chart of the client, the business priorities, the annual report, where the RH reviews their presentation and give them feedback and rating on it.

MY: So far the interaction, the vibe and the feedback has been fairly positive. The real test is, I’d say, wait 3 – 6 months for them to start interacting with the client, but all the indications we have in terms of their own self-confidence, and the feedback from the RHs and the delivery team interactions is that it’s been a positive step from where we’ve been last year.

“It has been great training in being more comfortable with being uncomfortable, especially when it comes to ambiguity.” – Arden Urycki

RV: You yourself have interacted with a lot of these kids from Program for Global Associates and you’ve got feedback from them regarding these changes. What are they saying and what are your thoughts?

MY: They like the experience but they’re also not entirely comfortable with the fact that it’s changed, so we’re sensitive to that. Having said that we do need to make changes and keep iterating and developing the program. But it’s also important to be sensitive to the fact that when we’re making these changes, it has an effect on how as a participant of the program they have to reset their expectations and start thinking and behaving differently. Even for next year we will make some changes. It will be a bit of a surprise.

RV: From what you described, these changes were not in an isolated fashion just for the Program for Global Associates alone but we were learning from both, and both of them had a focus on increased quality, feedback and assessment.

MY: Absolutely. They was a high level of rigor to the delivery and execution of the program. On the other side we are going to put a lot of effort behind the quality of the course, the learning experience itself, topics chosen, what is the lesson plan, having a good evaluation framework in place, that matches what’s being taught in class and prescribed as a syllabus.

RV: Do the Program for Global Associates grads get to see all of Mu Sigma? I was thinking of an example, like client visits.

MY: I’ve been here 10 years and I still haven’t seen all of Mu Sigma. So we have something called experience hacks that we’ve been doing for the past 3 – 4 months, and there is a specific stream of focus on the Program for Global Associates batch that they are given maximum opportunity to get exposed to different parts of the Mu Sigma ecosystem.

Just then, Sridhar Turaga who was walking by, stops and chips in.

ST: Three years, Madhu is that correct? We are doing something which nobody has ever done. In three years we haven’t just launched it and scaled it but have taken feedback and dramatically improved it also. That is worth highlighting. They should take pride in the fact that they are creating something. Many of them are actually more adventurous than their friends. That is the audience that Madhu has in mind.