Show me the Code 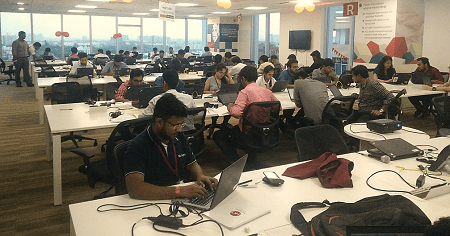 On the 30th, the usually quiet and half empty 7th floor resembled a carnival, a gala of sorts – coming alive with voices, lights and vibrant colors from end to end. Jatin and I arrived at the bay just in time to see Raghu kicking off the event in his usual quirky style, delivering a speech from atop a table before jumping off it to let the CEO take center stage. Dhiraj flagged off the proceedings, delivering some powerful thoughts, essentially defining the tone of the event.

The atmosphere was festive, to say the least. From delivery folks clutching their laptops to Unnikrishnan brandishing a camera, almost everyone was there. The first person we ran into was Ranjitha Gowda, an organizer for the event.

Deb: What’s the main purpose of the event?

Ranjitha: The main purpose is to get people to code. We also want to drive Jupyter adoption.

Deb: What’s your role, are you the organizer?

Deb: What are these colored tags for?

Ranjitha: Language wise, we have color-coded the bands which they are wearing.

Deb: Which language got the highest sign-ups?

Ranjitha: SQL. Around 200 folks signed up. The theme of the event is creative uses of Jupyter. We have given the problem statement but people are free to come up with their own hypotheses, insights. Be free and exhibit their creativity.

Deb: So all the coding happens within Jupyter?

Ranjitha: Yes, code runs within Jupyter, which supports these 4 languages. And people can move around. It’s the party theme that we have. We have snacks at 6:30, we’ll have cool-drinks and then karaoke night and some gaming corners here and there.

Deb: What kind of games?

Ranjitha: Small games only, not cricket and all.

“Show me the money”, a dialogue of Jerry Maguire, means make it real for me. In our world, it means, show me the code.” – Dhiraj

A few paces from there, I found Jacob Brown sitting with his team. I caught him in a pensive mood, absorbing everything around.

“We will move from day-to-day to ‘delivery by design’. For that, you got to think like a coder” – Dhiraj

Varsha S Kumar, the AL of the team, was sitting right there. I decided to get her take as well.

Deb: So you folks came by yourself or were told to?

Varsha: It’s more like we discussed this in our portfolio meeting and none of us have so far attended Jupyter sessions. So when we knew that there will be a session on Jupyter, we thought of coming.

Deb: So it’s got more of learning value than just going for fun?

Varsha: Yeah, it’s for learning. It’s more of Jupyter session the team is looking forward to. Because in our account, work is more on dashboard building and less on data processing.

“Delivery by design is respecting our art. Ex: a painter works with a pallet, brush, oil paint, color paint, canvas. That’s the grammar around which he works. That’s his way of coding” – Dhiraj

Krishna Murthy, part of the muCode techno team, was next on my radar. After a brief search, I caught him in the R room, just after the Jupyter session.

Deb: Hi Krishna, what is this all about?

Krishna: We wanted to inculcate a coding mindset in everyone. Then we thought of doing a hackathon or codathon. This is just the beginning. We have a lot more coming up.

Deb: Is it going to scale up from here?

Krishna: Exactly. This is what we call coding 101. It is just the basics. We are targeting the non-programmers. We want them to come and have fun.

Deb: So you want to have a competitive mindset or a learning mindset?

Krishna: Both. We want to have competitive mindset mixed with a thought-provoking one.

Deb: Future plans on such events?

I was taken aback by the vibrancy of the proceedings and energy of the people. So much that I wanted to see more. Stepping out for a minute I ran into Sheethal Sharmafrom Enriching Life @ Work, who also happened to be among the organizers.

Deb: So Sheethal, who all are there in the organizing team?

Deb: How long have you guys been working for this event?

Sheethal: Almost a month. But the last 2 weeks was the most hectic. Once we were pulled into this by Sridhar, we quickly brainstormed to figure out the design and execution. We had budget constraints, so we had to plan very carefully. Also the expectations from us was very huge.

Deb: What were the major challenges? I am assuming the budget constraint was the biggest?

Sheethal: Yeah, budget is always a major challenge for all events. But you have to be smart to work around the given budget and make sure that it doesn’t hinder the success of the event.

Deb: One of the biggest challenges is to get people to come and participate. What did you do that made so many people turn up?

Sheethal: Anila has been talking to a lot of ALs, sending out mails to them. At the end of each day when nominations were closed, we used to send mails regarding the number of people registered. Daily updates were given to ALs so that they were aware of the status and could push for registrations. We had a trophy specifically for maximum participation from a DU and also for maximum AL Participation. So we completely gamified the entire process and got everyone excited to participate.

Coming back to see what was going on, I bumped into Sridhar Turaga, who was more than happy to share his thoughts.

Deb: Hello Sridhar! So what’s the idea behind muCode extravaganza ?

Sridhar: We want everyone to work smarter in whatever they do. If you are not programmer, chance of you working smart is very low. We also want people to find innovative ways of solving problems and one of the most powerful tools of innovation is technology. And personally what excites me is that my first job was of a programmer. And I learnt a lot from that work. I learnt Object-oriented programming in the first year of the job and built a lot of things with limited resources. The thinking perpetuated in many other things later on. With first foundation in programming it will affect everything they do. And we have always said it’s about the combination of math, business and technology. When we mix these three, we’ll solve the problems in ways which nobody else will do. As simple as that.

Deb: What’s next, anything coming after this?

Sridhar: Absolutely, many things. In-fact we have called this initiative as strengthening the tech muscle. There are going to be a few hackathons, code celebrations. This is the first one. And the next four will get progressively deeper and tougher and more interesting. We want to do other activities in the company like learning programs, creation of utilities and workshops where design thinking around technology and awareness of technology components will increase.

The coding was still on, but most folks seemed to be done. So was I. On my way out, I decided to stop and talk to one more person. Koduru Vamsi Kiran was sitting in a secluded bay, typing away intently.

Deb:  Hi Vamsi, which language are you coding in?

Deb: How is the problem statement, how is the challenge?

Vamsi: Challenge is normal. Only thing I have to focus on, is how to apply these tests in R, because I never did that. But this is good, since I’m using Jupyter for the first time.

Deb: Are you here to compete or to learn?

Vamsi: I’m here to learn, later I’ll see what I can do with it. Nobody in the account currently knows it yet.

Vamsi: First is this event, then the movie “MS Dhoni: the untold story”.

True to what Ranjitha had said, the event did feel like a well-organized party. Judging by the conversations I had with colleagues, friends and strangers alike, the party was quite a hit. People already knew about Jupyter and wanted to learn it. muCode extravaganza brought much needed learning to everyone in the house, which was consumed with unprecedented enthusiasm. It wouldn’t be far-fetched to say that everyone is probably looking forward to the next hackathon in the series.