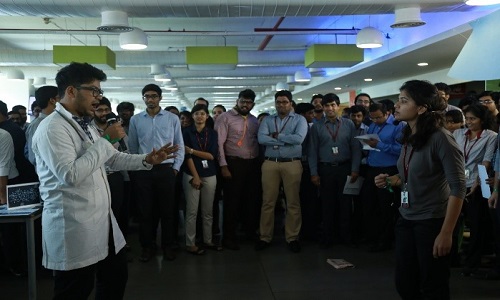 On Saturday the 17th September, the grand finale of the “Pharma Showcase” was conducted in Mu Sigma for people across the organization to understand and appreciate the impact being created by the teams working with various pharmaceutical giants and to take pride in the value we add to these companies. Over 600 people from both pharmaceutical and other verticals participated in the event. The crowd consisted of an interesting cocktail of people, from Dhiraj and the seasoned ADLs in this field to Columbus batches and a flock of new joiners who were just two days into their accounts.

The showcase began with all teams setting up booth camps for the topics they had chosen. The goal was to reach out to as many people as possible in under 30 minutes. The teams put in a lot of energy in conveying their idea about the future of pharmaceutical industry through PPTs, charts, graphs and info-graphics. The major focus of all the booth camps was on what could possibly be the next generation pharma revolution.

Every booth was equally intriguing with their display of state of the art concepts and projects like IoT, clinical trials assisted by wearable devices, etc. pertaining to the pharma domain. The booths were eye openers for the participants as they were able to relate to similar problems in their teams and take cues from to add a few techniques to their inventory of problem solving methods. Some booths also had fun events like ‘guesstimate’ where people took a stab at questions like “Which is the highest selling drug across all franchisees?”

The audience enjoyed a little skit that an account team had set up. Fever in the booths ran so high that they refused to subside even after Dhiraj called for the booths to be closed to focus on the other section of the event – the video presentations. The videos showcased the most innovative projects from every account. An account team’s presentation titled “Metabolic data book” which was fittingly judged the best, focused on the mother of all life style diseases – obesity. Citing another example, selecting patients with NAFLD (Non-alcoholic fatty liver disease) with cirrhosis as a proxy for NASH patients for the study is a classic example of an algorithm driven decision which may not be very intuitive but is vindicated by logic.

The video presentation was followed by two rounds of quizzing which made sure that the audience was hooked to their seats till the end of the event.

This write up will be incomplete without the mention of the Experience Hacks’ – Booth Camp team’s efforts to make this mini-Expose a grand success.

The video sessions were also followed by a round of questions from the audience. The energy created in the events by the fusion of intellectual minds did not fade away even in the following days as the crowd’s cheers shot through the roof when the presenters were being applauded and during the group photo-shoot.  The success of the event seems to be resonating in the account calls and regional calls and even the onsite counter parts feel that they have missed out on an exclusive opportunity to cross pollinate.

As a follow up to the mega event, we reached out to two of our leaders from the pharma accounts, Hitesh Manwani and Venkata Subramanian, seeking their answers to a few interesting questions. Here’s what they had to say:

Jatin: What is your key take away from the event?

Hitesh: Key take away for me is the paradigm changing work that has been done by Mu Sigma which even amazed BCG on their visit at our office. But we ourselves don’t give much credit to what we do. We should take pride in our work.

Venkata: For me the highlight was the amount of participation and energy that was on display. This event gave a common forum for pharma accounts to compete with each other in a healthy manner.

Jatin: What learnings can be derived by other industries from the work presented by pharma accounts?

Hitesh: Learnings can be derived from ABM (Agent Based Modelling) presented which act as the next-gen marketing model. The work done by one of the accounts on best promotion and recommendation of physicians could be applied on a similar route in utilities industry.

Jatin: Can you brief us on any problems that you solved using Mu Universe getting cues from similar problems in other accounts?

Jatin: Have you used data from wearable devices in any of your projects?

Venkata: IOT data has been used using Fitbits in one of Pfizer’s project. “Metabolic data book” presentation on obesity was one such display in the showcase highlighting the work.

Jatin: Can you imagine any gadget/sensor that is wearable and could warn the user of any imminent health problems?

Venkata: Fitbits device could be the example.

Jatin: Imagine, in the near future, because of advancements in generic engineering DNA data of every man and woman on earth is available just like the diagnostic data available now. Can you come up with an idea that leverages DNA data in pharma that could be pitched in from our side?

Venkata: Highly futuristic idea, can’t be pitched to client because a lot of research is required from scientific viewpoint. Genome work presented by one of the teams had a booth set up on similar lines.

Jatin: Learnings from other verticals which can be incorporated in pharma industry?

Venkata: Pricing problems solved in retail could act as a learning driver to solve similar problems in pharma. Problem of supply-chain management in CPG industry is quite relevant to one encountered by pharma industry.

Reach out to us with your thoughts and questions. We’ll get the right folks to answer them for you.