Program for Global Associates Grows Up 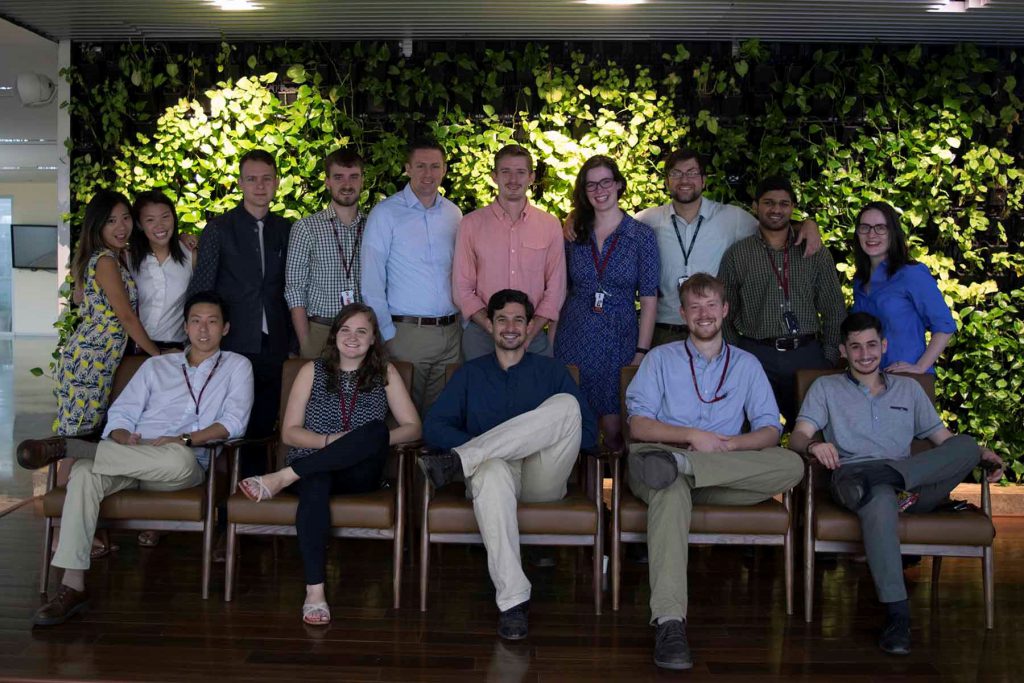 Mu Sigma is well known for its vibrant, young crowd. Yet, speaking of diversity, there is much more to our USP than meets the eye. Our friends from across the seas have been an integral part of the Bangalore office – they have indeed added flavor and spice to the Mu Sigma ecosystem.

So, where did they come from and how did it all begin?

The Columbus program was created with the intent of getting our hires from the US to experience the very unique and diverse Mu Sigma eco-system. It flagged off November 2014 onwards, resulting in new Mu Sigma recruits from the USA flying down to Bangalore – the epicenter of Mu Sigma delivery and operations, to start the first job of their careers and train with their Indian counterparts. While the role reversal is a matter of pride and joy for us, fetching overseas talent to drive innovation from ground zero, there were some questions about the effectiveness of the program.

Here is an account from Alexander Davidson and Olivia Manning from the September 2015 and May 2016 Columbus batches respectively, about their journey during the Columbus program.

“The first couple of weeks were a great experience as our offshore counterparts were very excited to meet us and ask us all about ourselves.” – Alex

Back in 2015, the Columbus program was still relatively young and fragile – and hence subject to some imperfections and certainly a fair amount of criticism. The first few weeks of MSU consisted of learning technical skills, mostly through self-learning. At the time, this meant that simple assignments were given, requiring trainees to perform SQL queries, create excel dashboards, perform simple database manipulation in R and pull summary statistics in SAS – exercises comprising solely of self-learning in which no classroom trainers were involved at all.

There were tests on these subjects to confirm the trainees’ understanding. Surprisingly though, the performance in these tests simply didn’t matter. If someone failed twice, they were pushed on through the program anyways.

One could argue that the first part of MSU was wanting in terms of effectiveness – requiring more classroom sessions and an emphasis on the practical use of the technology that was being utilized. The trainees still had no idea what a typical project engagement looked like for Mu Sigma.

After the self-learning phase, the Columbus batch was split up to work on group projects. For them, this was the most relevant part of MSU as they finally got to use newly gained analytical skills to solve a real-life business problem.

“My team worked many long nights defining the problem space, cleaning data, and developing an analytical solution. Perhaps the toughest part was telling the story of our project through a compelling business presentation. Throughout this process my team battled not only dirty data and frequent R crashes, but frustration as well, and overcame our differences to deliver a great solution.” – Alex

But, the mock project didn’t simulate an actual project at Mu Sigma – in so much as the Columbus batch individuals did not work with offshore counterparts as a typical engagement would be. Secondly, there was little or no aspect of client communication – a highly important component of an onsite role.

In fact, one thing Alex noted was the lack of training in two major skill sets – business communication and project management. Those are the two skills that one has to utilize the most as an onsite, but had little exposure to while they were in India.

The final part of MSU was shadowing. In this part, two Columbus trainees paired up to watch a couple of offshore teams work day to day and learn more about the industry verticals that they work in.

Alex argues that there was not enough focus given to real world application of technology and the development of project management / business communication skills. The real learning began once they came onsite and had to participate in client calls, lead daily calls with the offshore team at night and create power point decks that showed the team’s thought process on deliverables, and pitched proposals to the client.

Going by a continually improving process using feedback loops, the reimagined MSU and Columbus program has been designed using the above points in mind. Participants now get training in client communications, mock pitch the company through a CXO, and receive classroom instructions.

Alex feels hopeful, as he says that the next step in the improvement of the program will be more of project management training and a dedication to learning and understanding AoPS. (Art of Problem Solving)

The 2015 batches went through a unique experience full of ups and downs, a result of how the Columbus program functioned during that time. But a year down the line a lot has changed, with Columbus and MSU as a whole evolving dynamically based on feedback from all stakeholders, aimed at developing more robust and anti-fragile talent in the organization.

As for the 2016 Columbus Batches, they realized very quickly upon arrival that their expectations for MSU were almost entirely wrong, discovering over the first week how different the MSU program was going to be from the previous year – the flexible schedule had turned into structured classroom sessions with instructors from delivery.

The basic run down of MSU was 6 weeks of training covering Excel, SQL, R, Statistics and Python followed by a two week mock project. The new system of classroom learning allowed them to interact with countless folks from delivery acting as instructors and teaching assistants. It also provided a lot of structure to their learning with regular assignments and check points to ensure everyone was on the same level.

The first batch of the year encountered a lot of changes and unexpected twists. The first major shock came when they were tested in Excel. Turns out, they weren’t really prepared for it and only 6 of the 16 cleared the test.

“Despite our struggles with curriculum, we had some pretty awesome instructors like Zuheb who continually told us “Watch your feet, I’m about to drop some knowledge.” – Olivia

MSU not only taught them needed coding skills, but interspersed sessions on business skills and different accounts as well. Hours were spent laughing at awkward situations as they role played potential client interactions. They were introduced to the Mu Sigma ecosystem through direct interactions with the instructors and ALs who presented their accounts or discussed concepts with them.

As they got to the mock project phase, the batch was split up and placed in groups with the corresponding India induction batch. They spent many a long night at the office, arguing over muPDNA representations, fighting codes that wouldn’t run and bonding with their teams. They learned about the process of solving problems, but also about each other – different perspectives, differences in language and different working styles.

All throughout our time in MSU we’ve discovered Mu Sigma, India, and a little bit about ourselves.” – Olivia

Every experience in life is as much a journey for the person who experiences it, as it is for the provider of the experience. Both change. While Alex and Olivia experienced MSU at two very different times, the vision was ever the same. We take pride in having a learning mindset – in a way that instead of proclaiming expertise, we prefer to walk through the fire of continuous and extreme experimentation, cleansing us of past defects and changing form and shape, to become better as each day passes.