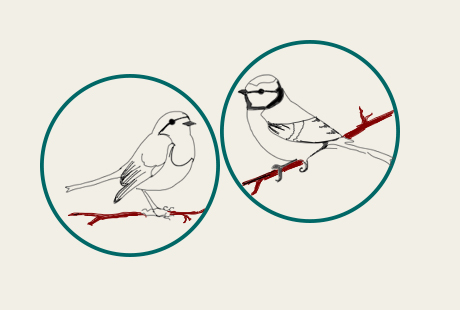 More than 100 years ago, ornithologists discovered that Blue Tits were far more adaptable to ecological disruptions than Robins. When milk used to get delivered early in the morning in bottles and aluminum seals hadn’t been invented, the milk bottles were left open. Robins and Blue Tits, both songbirds (known for their high intellect among birds) figured out exactly how to siphon the cream out of the milk from the bottle before it got taken inside the house. However after the First World War when milk bottles came with aluminum seals, almost all the Blue Tits in Britain learnt how to siphon the cream by opening the seals. An occasional Robin did learn the same, but never did the community of Robins learn as a whole. Ornithologists knew that Robins are belligerent birds shooing off other birds, while Blue Tits are known to be more social – communicating with one another. Being a smart songbird wasn’t good enough to crack the problem of aluminum seals, the network mattered.

A decade or so ago it was fairly clear to scientists that human beings were largely made up of bacteria. Bacteria – considered asocial, reclusive unicellular, sort of dumb organisms – help human beings digest food, stave off viruses and keep us healthy on one end and cause spine chilling diseases such as ulcers and cholera on the other. Bacteria (Vibrio Ficheri) that live inside squids exhibit bio-luminescence when they sense a certain critical mass of their own species.  These simple bacteria seemed to communicate simply with each other in the community they lived in and had the intelligence to switch on a certain metabolism (in this case a self-illuminating switch) when they found quorum. The bacteria were then talking to each other using a chemical language. We now believe that all bacteria, not just bioluminescent ones, communicate not just with members of its  own species, but also with bacteria of other species as well. Biologists believe that unicellular and seemingly asocial creatures as bacteria can cause significant impact not by themselves, but by communicating and working together as a network to accomplish very complex tasks such as cellular division of labor, defending against antagonists, counter-illumination camouflage, etc.. Complete disciplines such as synthetic biology and bacterial computing have evolved around this behavior.

What could happen if human beings sent out messages, updating their status of what they are doing and where they are? What could happen if other people get to understand that there is quorum and there is a cause they can identify with – sort of getting an intra-species signal? The outcome was fairly clear in January 2011. The world called it the “Arab Spring”. The world is still embroiled in what began as a march to Tahrir Square in Cairo popularized on Facebook. Our world of business needs marches where multidisciplinary leaders come together to move forward on ideas that are viral in adoption and can impact behaviors, helping decide on sticky issues and shaping public policy. Issues such as finding safe food, access to clean drinking water, faster response to disasters, and/or finding inexpensive capital need many business leaders who have experience with specific themes to come together.

We believe that decision makers in business are best poised to think of potential solutions. Decisions made within large enterprises are affecting consumers, changing behaviors of communities and shaping public policy. These decisions are being made with the help of Decision Scientists who pull consumption data, transform them to usable formats, model new behaviors, suggest interventions and monitor the impact of decisions made, jointly called decision sciences. What if we could engage the best of decision makers and best of decision scientists in conversation to help ask the right questions, help navigate them through data-driven decision making, have them co-learn disciplines that drive other industries, facilitate collaboration and co-innovate? We believe that the idea is very potent. However, there seemed to be a problem.

When we asked decision makers what inhibited them from making effective decisions faster within an enterprise, their response was fairly predictable – more than half of the stated reasons pointed to poor sharing of information. This stemmed from lack of sophistication of collaboration technologies to unavailability of experts, poor incentive structures and mistrust. This wasn’t new to us. We had seen how difficult it was to get people to collaborate towards change. When we flipped the question by asking the same decision makers what opportunities they felt were available in coming up with innovative ideas across the decision sciences theme, the world seemed to open up. None of the reasons that stifled enterprises were issues any longer as the window expanded to cross-industry collaboration. Decision makers simply rose to the larger purpose.

We believe that we have a role to play here as we sit at the center of a wide range of relationships with our customers across different industries. Our role is to facilitate the conversations and ensure that our customers achieve disproportionate returns, while we ensure data-driven decision making using a mixture of data science consulting and big data analytics software is institutionalized in our customers’ world.